Gorges Smythe
As a certified country curmudgeon, it's been said that I have an opinion on everything and a story for every occasion. Other folks just say that I'm a windbag. I, on the other hand, consider myself a purveyor of nostalgia, humor and social commentary from the country perspective. I also occasionally link to posts dealing with current events, politics, religion, prepping, history and homesteading. Please be aware that all entries are copyrighted and may not be used without permission. COMMENTS from anyone are very WELCOME, pro or con, as long as they aren't needlessly disrespectful. Any comments deleted after posting have merely been removed for privacy reasons. Many names or place names used in stories will be changed to protect the privacy of myself and others.

My Own Schwinn Story (w/pic) 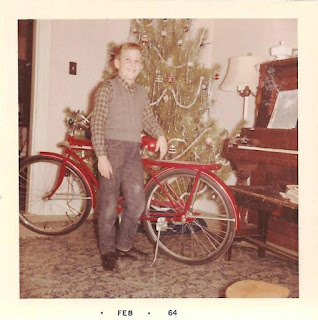 I was eight years old when the folks gave me a bike for Christmas. Dad had one as a kid and used it to deliver Grit papers (a weekly paper back then, not the monthly mag it became later). I don’t remember if I’d been wanting a bike or not, but I suspect so from my expression in the photo. I didn’t have much luck learning to ride it in the beginning and set it aside for several months. Finally, I got determined to master it and eased into it by coasting downhill, something entirely too easy to do when you live on a hill in the country.

After I mastered it, I used it to ride to my paternal grandparents not far over the hill and around the bend, plus to my maternal grandparents a mile up the paved country road. Two sets of aunts and uncles lived in between, so I visited them too on occasion. It took me to a friend’s house a few times, but not often as he lived farther away. I went down the road a half-mile or so and up the hill to the church we used to attend. I also road around the housing development across the valley for entertainment. I didn’t go far most of the time, generally no more than a couple miles away, past my country grade school to another friend’s house.

It also took me down to the neighbor’s across the road when a boy moved in my own age. I used it less when I began riding their horses with them and nearly abandoned it at age 14 when I bought my first horse. When I began driving, it was relegated to the barn where it rusted rather badly.

Eventually, I gave it away or sold it cheaply, I don’t remember for which. Now that I’m old and live on a hilltop with about two miles of reasonably flat paved road, I wish I still had it, but then again, my knees might not take all that cycling these days. Regardless, for six years, it got a lot of use. Copyright 7/3/2020
-
Posted by Gorges Smythe at 2:03 AM

Oh I knew that joy. Woke up on Christmas morning to find my beautiful red bike. I was 7. Rode it for 9 years and finally became a "cool" kid when I could ride "no hands".

That looks like a happy young man leaning against that bike. i remember when my dad brought home bicycles for me and my two sisters. Of course, I immediately tore the fenders off because that was how hot rodders did it. And god knows how many rookie baseball card fortunes were lost to the spokes of that bike getting the appropriate sounds form them!

Handsome lad! I am with you, I would love to cycle but the knees and throwing my leg over the rear wheel is a little problematic...