Gorges Smythe
As a certified country curmudgeon, it's been said that I have an opinion on everything and a story for every occasion. Other folks just say that I'm a windbag. I, on the other hand, consider myself a purveyor of nostalgia, humor and social commentary from the country perspective. I also occasionally link to posts dealing with current events, politics, religion, prepping, history and homesteading. Please be aware that all entries are copyrighted and may not be used without permission. COMMENTS from anyone are very WELCOME, pro or con, as long as they aren't needlessly disrespectful. Any comments deleted after posting have merely been removed for privacy reasons. Many names or place names used in stories will be changed to protect the privacy of myself and others. 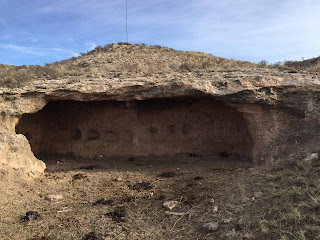 Perhaps the most unusual Post Office ever in the State of Texas............DEAN POST OFFICE,
DEAF SMITH COUNTY, TEXAS
Like most other counties in the State of Texas, Deaf Smith has had it's share of Post Offices. More that have been abandoned than are still operational. In Deaf Smith County. Ayr, which was the first county seat until it lost that status to La Plata. La Plata (formally known as Grenada) a major stop on the New Mexico to Amarillo road. It also served as the county seat of Deaf Smith County until in 1898 when its 28 houses and businesses were moved to Hereford. Others include Escarbada (on the XIT ranch) in 1889, Kelso from 1907-1908, and the subject of this brief study, the Dean Post Office 1892-1899.
What is especially notable about the Dean Post Office is that it was located in a caliche rock cave on the North bank of the Palo Duro Creek. Individual “boxes” were hand dug into the wall for the settlers in the area to come by and pick up their mail. This location is near the site of an old Indian campground and reliable live water spring. The site made for a perfect resting point for horses and dependable water going from Amarillo area to Hereford. Near the spring, two brothers by the name of Isaach built a two-room picket house (posts set in the ground, plastered with mud and roofed with sod). They eventually abandoned the house and in 1890 the Dean family occupied the house along with a tent which they had ordered from Montgomery Ward. J.R. Dean was the first Deaf Smith County judge and his son, Thomas served as the first postmaster of this post office. The two postmasters that served there were Thomas H. Dean in 1892, and Edward H. Frillwood, 1895 until it was abandoned.
Mail was delivered from Amarillo to Dean and then on to La Plata. Mr. J.H. Parrish, who had settled on a ranch Southeast of present day Dawn, opened a general store and unofficial post office there. In order to secure regular delivery to Dawn he secured Thomas Dean's help to demonstrate that the route needed to connect through Dawn. Parrish and Dean took turns for six months, delivering mail to Dawn via horseback. They also answered advertisements, and wrote to relatives in order to generate mail volume. The authorities were eventually convinced and designated Dawn a post office also.
This wonderful piece of panhandle history is located on private land that is still farmed and ranched actively. The owners have graciously allowed me to give this history of the site. It is not open to the public as open gates and sight seeing can create problems. For that reason, if you should know the location of this site, or the owners, please do not discuss it openly.
Information on this has been gathered from various sources of Deaf Smith County; The Hereford Brand; Amarillo Globe News, and personal knowledge of the family who owns the land.

Posted by Gorges Smythe at 2:04 PM